What a beautiful country – we, the Slovenians, say to ourselves, our friends and visitors. Saying this, we are brimming over with a warm feeling of contended pride, for we know we speak the truth. Slovenia is exceptionally beautiful, it is a piece of land at the heart of Europe, at the crossroads of routes leading from the cold north to the warm south and from the eastern sun to the west. Beauty dwells everywhere; in the Pannonian Plains, the majestic mountain ranges, the remote valleys of Gorenjska (Upper Carniola), on the undulating, roguishly tamed hills of Dolenjska (Lower Carniola), in Karst, the home of the famed “teran” wine, and in the open window of the azure Adriatic Sea; a handful of soil brimming with beauty.

Despite the geographic and ethnological diversity of the Slovenian territory, but the tradition of dance is rather uniform in its choreographic features.

Cognate dance forms have appeared in Slovenia in numerous variations, with the exception of the regions of Resia, Bela Krajina and Prekmurje.

The geographic vicinity of German countries left its impact upon the Slovenian national heritage. It was passed to younger generations by fiddlers, master craftsmen and soldiers who travelled all over the Austro-Hungarian empire, which at that time occupied the major part of Central Europe. 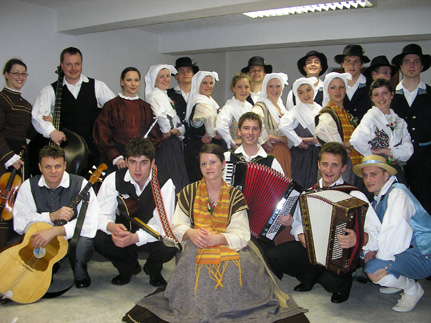 The predominating form of dance in this territory was dances in couples of more recent origin, dating from the 17th and 19th centuries. Slovenes recognized them as national heritage and have transformed and adjusted them to the nation’s preferences, character and temperament. The national heritage is the content and form of our lives, appearing in different periods, changing and then withering away.